Scottish Straight mimics the appearance of Scottish Shorthair, with the only difference being their ear shape, which have a more common shape and are actually straight. Otherwise, Scottish Straight possess all the defining traits and characteristics of it’s fold counterpart. There are straight-eared kittens in scottish fold litters, and due to the fact that Fold*Fold crossings may result in musculoskeletal flaws, they were only used as a breeding material for scottish folds. Later, after geneticists Peter Dieter and Olifan Jackson have studied the matter, it was completely clear that heterozygous crossings are preferred to reliably produce healthy litters. Because of that, the demand for Scottish Straight grew along with their renown, and soon they were separated into a new breed. Scottish Straight is a feline for those wishing for a “normal” cat, for it is genetically free of aggression, mutations and inherited flaws yet with an open, somewhat childish and naive visage as well as a friendly scottish temper.

An average-sized feline with a fit yet never heavy rectangular body. An adult scottish weighs around 6.5 - 12 lbs, sexual dimorphism affects this breed to some extent. It takes an experienced fancier to spot a straightear kitten at birth, for they are born the same, with the folding taking place at least at the third week.

Head: Round, with spherical skull and forehead, round and full cheeks, smooth cheekbones. Round and wide muzzle is accentuated by plump whisker pads. Wide, short and straight nose with a defined transition, sans "stop". Chiseled chin is round, prominent, but not sticking out.

Eyes: Large, round, wide set and open, adding an owly quality to their expression. Colour should harmonise that of coat.

Ears: Small to medium in size, set straight with no slant.. Not particularly wide at base, tapering to a rounded tip, outer rims should be almost parallel to each other. Auricle is thin, skin has a parchment touch, well coated from outside, with thick and fluffy brushes on the inside.

Neck: Short, wide and muscular, makes it seem as if torso is joined directly with the head.

Legs: Average in length and thickness, proportional to body length, with chiseled muscles.

Paws: Round and neat, average in size, look like an oval "glove".

Tail: Long, proportional to body length, well articular, not too wide at base, tapering towards the end.

Coat: Short, very soft, silky to the touch, not too clinging to the body.

Colours: All colours are allowed: solids, torties, blotched, colourpoint and others.

Scottish Straight is known for it’s calm, level temper. It behaves rather friendly, never showing a sign of aggression and trying to avoid conflict at any cost. These felines adapt well to any kind of living condition.

Scottish Straight are breeze to look after. They are straight, fit and are quite healthy. As with any shorthair breed, it is washed with a special treatment once every four weeks. During the molt season you may do this on a weekly basis. 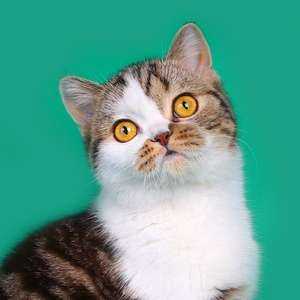 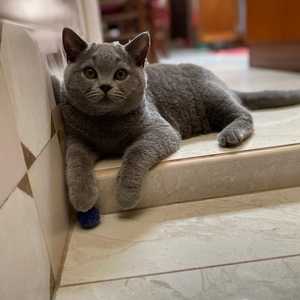