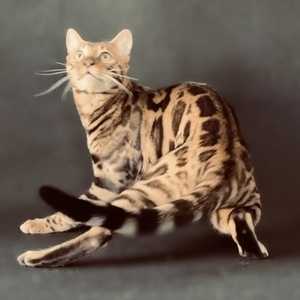 We have quite a bit of evidence showing that home cats can cross with wild ones, although their offspring is usually gifted with wild temper and sterility. Well that was not the case with Bengal cat, this breed is genuinely unique as if it is a product of intentional crossing between a feral and a pet cat. It was 1963 when Jean Sudgen-Mill has bought an Asian Leopard (Felis Prionailurus Bengalensis, ALC). She was so charmed by the little cutie-panther she got, that it became clear to her: people won't hunt them anymore if they could have one at home. To do that she took a leopard with it's unmatched fishing and swimming abilities as well as a neat coat, and an american shorthair as a local pet cat. The experiment was a success, the litter was actually fertile.

There were a series of crossings between them and their father, after which a number of peculiar litters came to life. The new breed was named after their ancestors - the Bengal Cat. It is known to us that William Centerwall studied the immune system of bengals, there were thoughts that they are resistant to feline leukemia, he tried to see how strong is their resistance through a series of crossings, some fruits of which were then brought to Jean for use in breeding work. Compulsive breeding, as you may guess, bore peculiar fruit: litter by litter cats became less nervous, while indian street cats and Arabian Mau shared their colourpoint patterns with them, and colour-blunting genes produced peculiar “winter" paints for bengals.

The first bengal called Millwood Finally Found was registered in 1983, with the first breed's appearance on a cat show following in 1985, the official acclaim came by six years later in 1991. Nowadays almost every association has given it's official recognition to the breed, although it is very rarely met all over the world.

The defining feature as well as the main thing checked by the standard is the paint and overall similarity to the wild forefather of the breed. These cats are at least mediocre, weighing 12-20 lbs. Their musculature is well protruding, their body is elongated and they tread with fast dashes. Every bengal bears asian leopard's genes, they grant them the gift of “wild" head shape, love to water and a seemingly unnatural grace, as well as a fantastic coat.

Head: Slightly small in proportion to body, but not to be taken to extreme. Broad modified wedge with rounded contours, longer than it is wide. The skull behind the ears makes a gentle curve and flows into the neck.
American and European standards differ in the profile part.
European systems describe almost straight profile with a possible light curve in the profile line.
American systems describe straight profile, where the curve of the forehead should flow into the bridge of the nose with no break. Bridge of nose extends above the eyes; the line of the bridge extends to the nose tip, making a very slight, to nearly straight, concave curve.
Nose is large and broad, with a slightly puffed nose leather, outlined with a dark line.
Muzzle and chin are full and broad, whisker pads are large and prominent, cheekbones are high and well-pronounced. Jowls are well developed in adult males.
Eyes: Big, oval, set wide apart, and on a slight bias toward the base of the ear. Eye color is independent of a coat color: variations from light-green, to bright yellow, often have walnut or olive-green color.
Ears: Rather small, broad at the base, with rounded tips. Set as much on the side as top of the head, following the contour of the face in the frontal view, and pointing forwards in the profile view.
Neck: Long, muscular, thick, proportional to the body.
Body: Long, substantional, well developed,muscular, not oriental or foreign. Torso is strong, chest is brought.
Legs: Medium length, strong, broad boning and as muscular, as the body. Hind legs are a bit longer than the front.
Paws: Big, round, with prominent knuckles.
Tail: Medium length, thick, tapered at end with rounded tip.
Coat: Short (allowance for slightly longer coat in kittens), luxurious, dense, closelying, unusually soft and silky to touch; with a characteristic color of a wild cat, which is specific for this breed – that is what are Bengals are very much valued.
Colors: Bengals have a very specific color. It is very bright, has a very contrast markings (spotted and marbled) of different shades of black, chocolate, orange or cinnamon on the very warm underground – ranging from orange-gold to elephant-bone color. Spotted or marbled markings should be horizontally oriented, without tendency to vertical lines. Spots and marbled markings can have any form and size («oyster», «butterfly», etc.); the more complicated – the better. Contrast with the underground should be maximal, to allow markings have a very distinct contours. Neckless and markings should be well pronounced and distinct. Inner part of the body should be light: the lighter – the better.
Pointed, sepia and mink Bengals have an elephant-bone colored body, with rather distinct markings (spotted or marbled) colored into brown color (of any shade).
Black silver Bengals have almost white undercoat and dark-grey or black markings over the body.
One fact is very important: fuzzing. It is a typical mimicry, which Bengals inherited from their wild leopard ancestors. This allows wild animals to hide their babies from the enemy environment. So, a 3-4 weeks old Bengal baby, who was born very bright, can turn into a very grey looking kitten. Underground becomes grey and markings – very light and not distinct. But by the age of 3 months, a kitten starts to be bright again. “Final" color kittens get by the age of 8-10 months.
Penalize: Spots on body running together vertically forming a mackerel tabby pattern on spotted cats; circular bulls-eye pattern on marbled cats; substantially darker point color (as compared to color of body markings) in Seal Sepia, Seal Mink, or Seal Lynx Point cats. Any distinct locket on the neck, chest, abdomen or any other area.
Disqualification on shows: Belly not patterned. Aggressive behaviour.
Disqualification for all breeds: Amputated claws, cryptorchism, deafness. Any bone deformation in the head, body, limbs.

Despite it's numerous benefits, one should keep in mind that their hunter instinct boosts their activity and mobility levels to way bigger than usual, especially for the kittens which may sometimes be a trouble. Generally, their temper is only level enough after 4 - 7 generations since crossing with a feral cat. New generation feline si curious and friendly, although it is not likely to form bonds with multiple owners. Their memory and wits make them a good learners and protect them from excessive stress of changing apartments. It is thought that males are more tender than females, bengal damsels are prone to overacting in both their love and their disgust. While being peaceful with dogs and other pets, they may sometimes show their wild side. Being so active and self-sufficient they are more than a fine player and entertainer, but are capable of taking a bath with minimal fuss. These felines may always be quiet, but they do always need your care and attention, this is what they prove by sitting in your hands and on your shoulders, although they won't stand being held anywhere against their will.

Despite the exotic appearance, bengals are nowhere near exotic to look after. Their short coat needs no frequent brushing, although you would want to smoothen it with a rubber brush from time to time. Bengals are tidy and healthy on their own, with their water attunement letting you both have fun from washing.

You should never mix professional and natural food. Manufactured nutritions are an optimal choice, whether dry or wet, they are balanced enough to have all the needed vitamins and minerals, although it won't hurt if you treat them with a nice piece of raw beef, rabbit or venison. These cats do love their water running when they drink it, as such you might suggest buying a portable fountain.